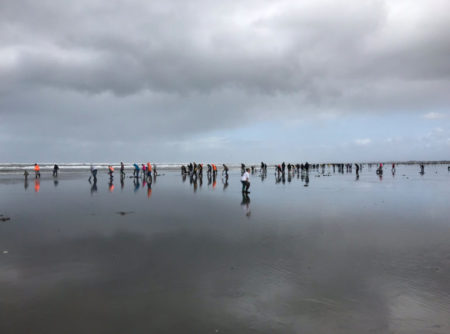 The tentative coastal razor clam digging dates have been set and Long Beach diggers will get ample time to seek out clams during the 2019-2020 season.

Dan Ayres, the head Washington Department of Fish and Wildlife (WDFW) coastal shellfish manager says his staff completed summer stock assessments in late August – a deciding factor in the harvest number of razor clams – and the outlook is very rosy.

“We’ve got a nice uptick in razor clam populations across the board and are looking at a great season of digging,” said Ayres. “I’m very excited for what we’ll have to offer clam diggers and that will transect into a much better outlook than last season. If ocean conditions are good as well as some other factors, then razor clams tend to rebound rather quickly.”

On the southern coast, Long Beach has recovered from last year’s four day digging season and could see as many as 100 digging days if all goes as planned. The young razor clam population is close to more than 25 million with around 5.2 million adult clams available to harvest. About 25% of the adult clams measure more than 4 inches and most are 3 to 3.7 inches.

At Twin Harbors beaches the harvestable number of clams is up from 1.4 million last year to 1.8 million this season. The Copalis area total allowable catch (TAC) is 2-plus million and way up from the 860,100 clams last year. Razor clams at Copalis averaged a healthy 4.1 inches.

Mocrocks beaches is expected to see a slight increase of 1.65 million TAC over last year’s share of 1.5 million. The TAC at Kalaloch is down but WDFW plans to get some digging days plugged into the schedule.

Razor clam digging is a big deal for small coastal communities who rely on these opportunities during the lean tourist times in fall, winter and spring to help boost their economy.

So far, marine toxin levels for domoic acid remained under the 20 parts-per-million (ppm) cutoff. Fall and winter digging occurs during afternoon or evening low tides only. Final approval depends on marine toxin testing and are usually announced one to two weeks prior to each series of digs.