May 2020 – Despite a Cloudy Future, Summer Could Be a Beacon of Light 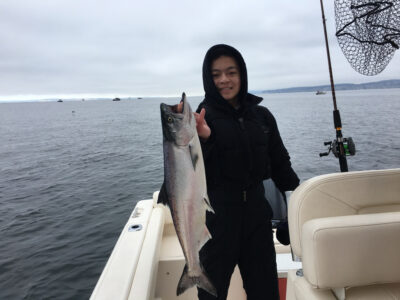 The relationship anglers had for so many decades were truly unforgettable but for the moment it is time to move on. It wasn’t an easy pill to swallow for those who enjoyed spending time with you on the water. To say the least it was “complicated.”

When you exited the salmon season setting process door on April 10, it hurt deeply and thoughts of the “good old days” came flooding back filled with joy, sorrow, success and defeat.As with any “break up” the blame points to a myriad of issues like declining Stillaguamish, Skagit and mid-Hood Canal chinook runs just to name a few salmon stocks of concern.

Even more upsetting is polluted watersheds and a loss of robust habitat; disagreements between co-managers; seals and sea lions feasting on salmon at alarming rates; issues with southern resident killer whales; and recent droughts, flooding and the dreaded “Blob.” To make matters worse, anglers never got a chance to say goodbye due to the current statewide fishing ban tied to the COVID-19 pandemic.

Now all that’s left are thoughts of your shimmering silvery and purplish colors; the warmth you created in the darkest, bleakest of winter days; and most of all what a great sport you were to the 15,000 to 22,000 anglers who eagerly awaited a chance to hook up with you at their favorite fishing holes.
It was by no means an easy job for all those involved in the North of Falcon process who worked tirelessly and made gut-wrenching decisions. “We value the winter fisheries but I think at the end of the day we wanted to try to preserve as much of the robust summer opportunities as we could,” said Mark Baltzell, the WDFW’s recreational salmon manager. “I don’t want to say we (felt) good about making those decisions.”

As a WDFW sport fishing advisory board summed it up, “the closures represent a loss of approximately 24 area-months to sport fishing opportunity compared to last year, the most restricted fishery in history.”
Closed in the winter of 2020-2021 are the eastern Strait (Area 6), San Juan Islands (7), east side of Whidbey Island (8-1 and 8-2), northern Puget Sound (9), south-central Puget Sound (11) and Hood Canal (12).
Hanging onto a limb are the western Strait at Sekiu (5) open March 1-April 30; central Puget Sound (10) open Jan. 1-March 31; and southern Puget Sound (13) open year-round. “I’m hopeful this is just a one-year anomaly and that we can get things back on track,” said Tom Nelson, host of 710 ESPN The Outdoor Line show and WDFW Puget Sound sport fishing advisory board member. “From what we know the ocean conditions are improving and we’ve had more favorable conditions in the river for young salmon in recent years.” Yes, like Nelson said, hope is eternal and everyone needs to ensure themselves the “break up” could turn into a “make up” in the not too distant future.

Summer Could be Beacon of Light Despite a Cloudy Future 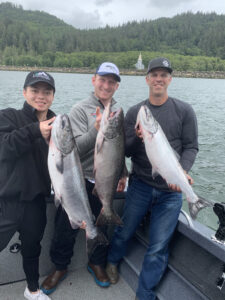 Southern Puget Sound (13) is open year-round and can be decent for early summer chinook, and late summer and early fall for chinook and coho.

There is a variety of bubble and terminal fisheries as well as piers open year-round for shore-bound anglers. The Tulalip Bubble Fishery is open for chinook June 1-Sept. 2 (fishing allowed Fridays to noon on Mondays only) and Sept. 7-30 (fishing allowed weekends only).

NOTE: All the planned season openings are based on when the “Stay Home, Stay Healthy” order is lifted. WDFW announced on April 28 that marine salmon fishing will reopen May 5. Other marine fisheries for spot shrimp (expected to reopen May 16), halibut and intertidal shellfish harvest remain closed. All coastal fisheries (Areas 1 to 4) also remain closed with an opening date to be determined. For details, go to WDFW website. 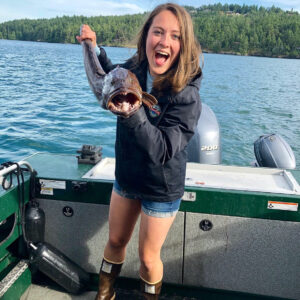 WDFW announced that all freshwater fishing will reopen May 5 and other fisheries like hatchery chinook in southern Puget Sound (Area 13) and lingcod in most areas of Puget Sound and Strait of Juan de Fuca (Marine Catch Areas 5, 6, 7, 8-1, 8-2, 9, 10, 11 and 13) will also open on that date. For trout chasers more than 16.5 million trout and kokanee have been planted into 546 water bodies across the state. Some years ago, WDFW devised a cost-effective way to produce larger catchable-sized trout – 11 inches compared to 8 inches – in hatcheries, which has been well-received by anglers surveyed on previous openers. Anglers should find about 2.19 million catchable trout in lakes and ponds. For a list of lakes expected to be planted, go to https://wdfw.wa.gov/fishing/reports/stocking/trout-plants.

WDFW is also stocking 146,559 jumbo trout averaging more than 14 inches in length and one pound or larger in weight. Adding to that is more than 14 million fry, fingerlings, and put and grow trout that went into lakes during spring and fall of 2019. WDFW still has plans to hold the popular WDFW Statewide Trout Fishing Derby (normally gets underway from April 25 through Oct. 31) that features more than 100 lakes planted with around 1,200 tagged trout. There are over 1,000 prizes donated from more than 100 participating businesses totaling over $40,000.

“We are currently planning on moving forward with the derby and in the process of assigning prizes to lakes, though due to the COVID-19 Stay Home-Stay Healthy order, we will need to delay the start of the derby,” said Steve Caromile, WDFW inland fish program manager. “Last year we had roughly half the tags returned statewide which is a pretty good percentage.” WDFW has created a new online system for anglers who catch tagged trout to report them. Depending on the prize they will either be mailed or picked up at WDFW regional offices by the recipient. Anglers will also be able to share their derby success on social media with the hash tag of #watroutderby. For details, go to https://wdfw.wa.gov/fishing/contests/trout-derby.

Many have been clamoring on when the popular spot shrimp fishery will begin along inner-marine waterways and the plan is to reopen them on May 16. The original start dates depending on the areas was May 3 and May 16. “We’ve been running through a planning exercise in order to figure out what fisheries pertaining to (spot shrimp) would look like and at this point it looks like things will kick off on May 16,” said Aaron Dufault, a WDFW Puget Sound shellfish manager. “Initially we had plans for a staggered opening in certain areas by two weeks and now we need to figure out what our plans will be due to the later start. That could mean we just open all areas on the same date or stagger out the dates by area.” Others in the WDFW agency have also been hard at work with detailing out how fisheries might possibly look once the fishing ban is lifted. The halibut fishery was supposed to open on mid-April and is often regarded as one of the first and most popular fishing opportunities.
“Nothing is carved in stone and we are not making decisions and looking toward our director as to when we could open any halibut fisheries,” said Heather Hall, the WDFW halibut resource manager.
“We recognize there is a lot of uncertainty when it comes to recreational fishing reopening in itself,” Hall said. “We are working on ways to provide opportunities in a way that doesn’t deviate far from the governor’s approach to the “Stay Home, Stay Healthy (order).” To reimplement the halibut fisheries is even more complicated as currently Neah Bay and La Push communities are not allowing the general public into their communities. “I’ve talked to folks at the Makah Tribe and as you can imagine it is a scary idea to have this virus be introduced to their small communities and the results could be devastating,” Hall said. “Even if we reopened fishing I don’t think those areas will be open at the same time and will take a more conservative approach.” Hall says their agency has conducted ad-hoc conference calls with sport and charter boat, and port and community representatives to get their feedback. “We recognize that it would be really disruptive to open just Ilwaco, Westport and maybe Sekiu where you’d create a surge in effort,” Hall said. “That would also hurt the northern coastal communities. What I heard from the caller is they really wanted to open all the coastal areas at the same time in fairness. To do that were thinking of pushing the halibut season opening into August.”

The other complication of an earlier summer opener is it would be hard on the WDFW sampling staff to manage a salmon and halibut fishery at the same time. In contrast to the coast there is some interest to get the Puget Sound/Strait of Juan de Fuca halibut fishery open sooner although it would be dependent of the healthy agencies from each of those communities and whether WDFW sampling could function properly with the social distancing rules. “If it is all workable then we could say let’s ‘go for it’ sometime in May,” Hall said. “But with that it does take some planning and we would probably not give the green light to halibut fishing right away. I think we would feel comfortable to open on May 14 (in the Puget Sound and Strait regions).

A Word on the NW Fishing Derby Series 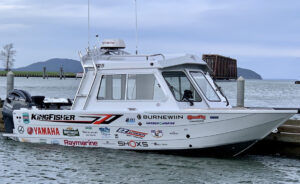 Restarting the 2020 NW Fishing Derby Series remains up in the air but one derby organizer is thinking outside of the box to ensure the safety and well-being of anglers while continuing their events later this summer. Crissy Cooper, owner of West Coast Adventure in Brookings, Oregon, and derby coordinator, has decided to launch three derbies digitally and will work with the Oregon Department of Fish and Wildlife (ODFW), county commissioners and state coastal caucus members on best practices and education. “In an effort to support social distancing we are going digital with remote weigh-in stations at the marinas where we host events,” Cooper said. “This app (wideopenfishing.com) is a great platform to use and we’re hopeful it’ll really build into something strong in the future for our derbies.”
The revamped southern Oregon derbies are the Slam ’n Salmon Derby from June 20 to Aug. 7 in Brookings; For the Love of Cod Derby in September/October with dates TBD; and South Coast Oregon Sport Tuna Classic at Charleston from July 3 to Sept. 7. For details, go to West Coast Adventure website.

The two cod derbies were originally scheduled on March 21-22 and March 28-29, and the tuna classic replaces the Father’s Day Big Bass Classic at Tenmile Lake on June 20-21. The Something Catchy Kokanee Derby at Lake Chelan on April 18-19; the Lake Stevens Kokanee Derby on May 23; and the Gig Harbor PSA Salmon Derby on Aug. 8 are cancelled.
A decision on the Bellingham PSA Salmon Derby on July 10-12 will occur at the club’s May 21 meeting. There are thoughts to transform the event to a coho derby.

I hope to see you on the water soon and in the meantime be safe and wash your hands!